Complexity Is Common: Reflections On Being Both, Part 1 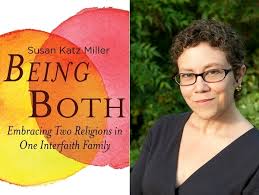 I have been wanting to write a bit on this blog about Susan Katz Miller's book, "Being Both:  Embracing Two Religions in One Interfaith Family".  Sue is a friend and I was one of the many, many people interviewed as part of her research on interfaith families and the communities which support them.  The book has just come out in paperback and Sue has a number of events in the Washington D.C./Baltimore area coming up.

Sue's book is in large part an encouraging and practical guide for families who want to raise their children in more than one religious tradition.  But the book more than a manual--it offers a fascinating and truthful picture of the world as it is.  Anyone who is interested in questions about how we figure out who we are and where we belong will find it fascinating.  Sue bravely declares what many people already know to be true:  identity is not monolithic.  We are not all completely one thing or another thing.

Last Thursday, NPR ran a short piece called "Interfaith Chaplains Revitalize an Old Role on College Campuses".  The focus was on the changing face of college chaplaincy, but what caught my attention was the changing shape of religious identity in America.  Here's how the reporter described the students at a gathering at UCLA:

PARSONS: This is USC's interfaith council. This evening, there are Muslim students, Catholics, a Sikh, an agnostic and a few that are hard to pin down.

JOSEPH ROSS: I do a Bible study pretty consistently every year with the Navigators, which is an Evangelical Christian group on campus.

PARSONS: Joseph Ross is a junior from El Segundo.

ROSS: I have also done a Torah study my freshman year. I do atheist club and I've done a Muslim halaqa, which is kind of a teaching. It was a...

PARSONS: Ross is a religion major and - while you might not guess it - a lifelong Methodist. USC Dean of Religious Life, Varun Soni, says this complexity is common.

VARUN SONI: Some just come up with these hybridized identities - I'm a Zen Christian, I'm sushi. I was like, what's sushi? Oh, my mom is Sunni and my father is Shia, so I'm sushi. I'm a Hin-Jew, I'm a Jew-Bu.

These are the facts on the ground.  This is the world as it is.  And in my experience, it is just a clearer (and cuter) description of how the world has been for a long time.

Case in point:  More than 20 years ago, during my last year in Divinity School, I participated in an interfaith dialogue program called "Seminarians Interacting" run by the National Conference of Christians and Jews (now called the National Conference for Community and Justice).  The program brought together rabbinical students from the Conservative, Reform and Reconstructionist seminaries and Roman Catholic, Christian Orthodox, Evangelical and "Ecumenical" (their term for people like me) Christian seminarians.  We spent four weekends together, traveling to different seminaries, worshiping in each other's traditions and engaging in dialogue.

At the outset of the program, we were given very clear instructions.  Each of us was to stand within our own tradition and engage with others recognizing and honoring where they stood.  They demonstrated this physically by drawing separate circles on the floor and having us each stand inside the boundaries of that group's circle.  They wanted to be clear that none of us were there to convert other people to our religious path.  In order to feel like we could safely engage in dialogue with each other, the leaders felt that we each needed to have clear boundaries around our identity.

As the year of dialogue progressed, I began to realize that the facts on the ground didn't quite match up to the instructions we were given.  There were some participants who had grown up in their current religion and had never ventured outside of the boundaries of that identity.  But for at least half of the people I got to know through that program, their identity was a little more complex.

One Jewish seminarian had converted from Christianity.  One Christian seminarian had almost converted to Judaism but decided she could go through with her decision as she stood at the edge of the mikvah.  Several of the participants were children of interfaith marriages.  Several had been in serious romantic relationships with people of other faiths.  And then there was me, recently married to a Jewish man.  At the beginning of the program, I was worried I would be "found out" and made to feel uncomfortable.  By the end of the program, I felt right at home.

Religious communities--like any human group--create a sense of identity by defining boundaries.  Who is in?  Who is out?  Who is "us" and who is "them"?  I recognize that groups do this not to be mean or because they love to exclude people, but because they want to establish a sense of group identity which can be a very helpful thing.

But the other fact of life is that people rarely line up the way we want them to.  Some people fit clearly into categories but many others do not.  As the reporter put it, complexity is common.

When I think now of that first session of Seminarians Interaction, I have to laugh.  We each stood inside our own circle and spoke to each other from that position.  But in reality, most of our interaction with each other looks like a game of Twister.  We have a foot on one circle and another foot on another circle.  We reaching across to get at least part of our hand into another circle.  In the process we end up bumping into each other, holding each other up, pushing each other around and occasionally holding hands.

The comments to this entry are closed.