Agreeing to Forget the Harm We've Done to Each Other
Uncle Milton's Grief: Veteran's Day Remembrances

Grief Would Kill Us If It Weren't For Community: Reflections of Big Hero 6 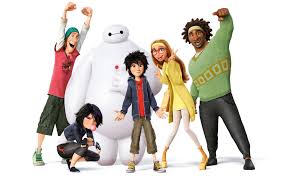 I am so glad I still have a kid at home so I don't have to go to movies like Big Hero 6 alone.  When I no longer have kids at home, I'll probably have to borrow someone else's kids to go see all the superhero movies.  These movies consistently address some pretty profound questions:  What hurts us and why?  What saves us and how?  What is to be trusted and what is to be feared?  What is important and what only seems important?  I'm fascinated with the thoughtful and complex ways many of the superhero movies I've seen address these questions.

Plus, I think I have the sense of humor of an eight-year-old.  Case in point:  I laughed until I cried at the preview for the new penguin movie.  And Big Hero Six had me laughing out loud in a number of places.

Now, before you judge me, know that I recognize the many shortcomings of this movie.  Once the plot comes to the inevitable sequences of blasting and chasing, things seemed to go on autopilot.  The movie looked and sounded like every other movies in its genre.  I pretty much lost interest in the movie during the second half.

I also liked the same things a lot of people liked--the cityscape of "San Fransokyo" and the re-imagined Golden Gate bridge) and the big, puffy "health care companion" robot named Baymax who squeaks and leaks and deflates and inflates.  I appreciated the "nerds rule" ethic of the movie in general.  Unlike Batman or James Bond who have technological experts they can call on when needed, these superfriends do their own inventing and constructing.  And I was particularly fond of one of the friends, Wasabi, a big black guy with dreds who is very OCD about tools and traffic laws.

But what really fascinated me was what the movie had to say about grief.  Both the "good guy" (Hiro, an orphaned 14 year old who is a genius technological innovator) and the "bad guy" in the story are driven by the loss of the person they love the most.  In a world where bad guys are often depicted as driven by extreme ideologies or primitive allegiances which are incomprehensible to us, I think that its pretty gutsy to assert that both sides in a battle have the exact same motivation.

The difference between the protagonist and the antagonist is that Hiro is advised and guided by his robot Baymax to connect with friends during times of intense grief.  The other person didn't get or take that advice.  So while Hiro's friends intercede when Hiro starts to become malicious, there isn't anyone to hold the villain back or talk him down.

This is a fascinating addition to the on-going superhero-fueled conversation about what saves us.  More and more in these movies, teams of people have to work together to solve problems--the Transformers, the X-Men, the Avengers, the Guardians of the Galaxy and the Fantastic Four all work as a group.  Even Thor needed a lot of consultation and assistance in the last movie I saw with him.

But in Big Hero 6, people need people not just because they need lots of different specialized skills and aptitudes.  People need people to save them from their own worst instincts--not just greed or selfishness, but the desire for revenge, the desire to hurt other people when you are hurting yourself.  Community is their conscience.  Isn't that interesting?  Who wants to discuss?

The comments to this entry are closed.